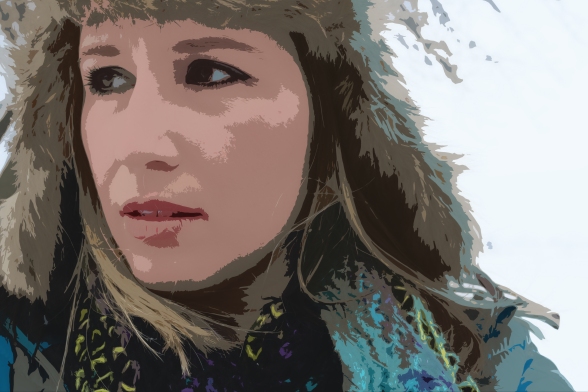 I’ve been searching for myself for years. A couple of times, I’ve almost found me, but ultimately, I’m as elusive today as I was ten years ago, when I first knew I needed to be found in the first place.

This year, on the first day of 2015, I’ve decided to appeal to the public. Maybe you can help. I’d love to meet me. I’ve wanted to meet me for years, but I just simply can’t seem to be in the same place at the same time as myself.

I don’t think I’m particularly unique looking, but I also don’t think I look like everybody else; especially when I wear my Russian Hat for the winter. (See photo below.)

Have You Seen This Girl?

However, it appears that I have a twin. Now, I have been told over the years that I look similar to quite a few people. A good friend of mine, who is a frequent traveler, swore he saw me when he boarded an airplane. Another filmmaker friend of mine is constantly sending me “ALA” (Ashley Lookalike) photos from the semi-celebrity world. (Sports commentators/minor movie stars/etc.)

On another occasion, while traveling in Atlantic City with my Aunt, I went to a show called, “Legends in Concert,” where the actor portraying Michael Jackson first told me I looked exactly like one of their backup dancers, Roberta. That one was extremely flattering, as I thought she was a fiery phenomenon of dancing talent. They asked her to come meet me, and she graciously did so.

Is it vain to say I think she’s gorgeous??

However, I’m specifically speaking of the twin in my local community. The city I live in and around isn’t that large, and yet, we have managed to miss each other for nearly ten years now. Over these years, I’ve lost count of the near miss stories, but here are just a few I can bring to memory. They are in no particular order.

First Incident: One Sunday, after church, I was feeling particularly royal, so I ventured into the Castle of White for lunch. Upon sauntering up the counter, as one does when determining a slider is the foe your stomach has chosen to vanquish, I lowered my gaze from the menu to give my order, and met the eyes of a very bewildered young cashier. Such was the intensity of his stare, that I instinctively put a hand to my face, to see if some blemish or horn had grown where my nose or eyes once were.

“What’s wrong?” I finally asked.
“You….you were just in here.” He stammered.
“No. No, I just walked in here for the first time. I promise.”
“You weren’t just in here?”
“Nope. I haven’t yet made the regrettable choice of eating a slider. I’d remember that.”
“I swear you were just here.”
“I promise.”

Giving me a very doubtful side eye, he agreed to take my order, but I could see he was shaken none the less.

Second Incident: For a while, every Wednesday for lunch, my Mom and I would eat at our local Arby’s. The staff there got to know us by name. We missed a couple weeks, and when we finally came back, sometime in late August, the manager smiled warmly at me.

“Did you have a happy birthday?”

I paused and thought a minute. “I did. I mean, it was in February, but it was pretty happy.”

She furrowed her brow. “But you were just in here last week talking about your birthday.”

Used to the confusion by now, I explained that my unknown twin must have been in. There are no fewer than a dozen other stories where I have walked into an establishment, only to be accused of having just been there. I’ve even gone so far as to ask the patrons if they know the name of the person they believe me to be, and they usually say they didn’t ask, or didn’t know.

Now. There could be the excuse that strangers in the community don’t really know me that well, so they can be forgiven for confusing me for someone who looks similar. I offer the Third and Fourth Incidents as a counter argument.

My close friends all know of my plight, as after some incident happens, I tend to call one of them and laugh, “It’s happened again!” They used to think it was ridiculous too. That is, until they started seeing me.

Let me preface the following stories by saying these two friends are people who made two films with me, and saw me on nearly a daily basis for extended periods of time.

Third Incident: One friend, Nils, was in a volleyball tournament a few years ago. He called me and swore that one of the people on the opposing team was me. He obviously knew that it wasn’t, as I don’t play volleyball, and he knew I wasn’t there, but he said it still took him a while to be wholly convinced it really wasn’t me. When I asked if he had gotten the name, he said he had been so distracted, that he forgot to ask.

Fourth Incident: My other friend, Rachael, who sees me on nearly a daily basis, movie or no movie, called me in a frenzy of excitement one day. “Are you driving a new car? Or have you borrowed a new car for the day or something?”
“No, why?”
“Where are you right now??”
“I’m home.” I felt alarmed. “What’s wrong?”
“I saw you!” She exalted.  “I mean, I saw her! I saw you driving a car. But it wasn’t your car, so it couldn’t be you. They’re right. Everybody is right! She looks EXACTLY like you.”

I have saved the most telling incident for last. I attended Sunday School with some acquaintances for several months. One Sunday, they came in and excitedly told me their experience of the previous week.

Fifth Incident: The husband said, “We were shopping last week, and we saw you. Or at least we thought it was you. You had three little kids with you, so I went up to you and started talking. Then, all of a sudden, you stopped me and said, “You think I’m Ashley Raymer-Brown, don’t you?”
And I said, “Yes…..” And then you, or I guess not you, said, “I’m not her.”

I asked, once again, if he managed to get my/her name, and he said he had not.

But the fascinating part of the story is, she has obviously been having the same issues that I’ve been having, only she’s got the advantage on me. She knows my name, but I still don’t know hers.

So I ask you, public friends and family. If you see me out and about, please, come talk to me. And if it’s not me, find out who I am. And then let me know that I’m dying to meet me.

Follow Ashley Raymer-Brown on WordPress.com
Hey guys!!!
If you haven't yet had a chance to check out our podcasting venture over the past year, here's a 90-second recap of all the topics we've covered in the past year! Many thanks to our special guests!!
The candid moments you capture while traveling are some of my very favorite moments. 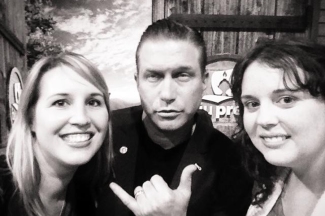 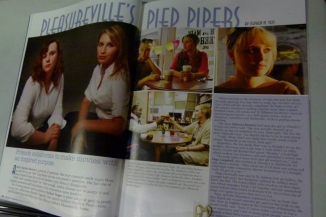