If you’ve ever wondered about the power of positive words, allow me to reintroduce Simon. For those of you who haven’t yet met him, look no further than the article entitled, “Simon Sees A Murder.” It’s two below this one. I’ll wait while you catch up.

Great. Now that you know how he feels about bath time, let me tell you a little bit more about his origin story. When I would visit him at the Humane Society before adopting him, he would run to me, leap into my lap, flip over on his back and purr. I was assured that he had ‘chosen’ me for his owner, and it seemed that was true.

Love means exposing your belly and hanging upside down.

However, when I took him home, something strange happened. He got tiny bumps all over his little body, and whenever I would try to pet him, he would purr furiously and LOUDLY, but immediately begin to choke and run away. I took him to the vet, got some medicine, and his bumps cleared up, but not the purr/choke issue.

I finally figured out that when I tried to pet him, he became so overwhelmed with happiness, that his purr motor was ‘overheating’ and choking him, thus causing him to run away.

He was literally becoming allergic to love.

My friend and I joked that he reminded us of a certain person that we both knew, who also when shown affection, would become overwhelmed and run away.* (*Don’t try to guess who it is. I don’t have any friends named Simon.)  He (the cat) was also extremely thin. Weeks passed where I would try and pick him up to pet him, and he would purr, choke, and struggle to get away. I worried that perhaps something was seriously wrong with him. He wanted to be near me, but couldn’t make the choking stop. 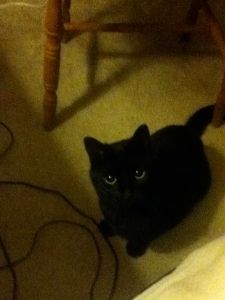 Why does love hurt?

The Humane Society workers assured me that he would be fine, and that it was a common problem around the change of seasons, but I still worried. Because that’s what I do. He also tended to pick fights with the other cats when I would try to show them affection.  If he couldn’t have love, nobody could. Things seemed to be at an impass. If I couldn’t physically touch him without him choking, and if he was actually really sick, I still wanted a way to give him a very happy life. After some thought, I changed my strategy.

I decided to test the actual power of positive words. Let me preface by saying, I have always talked to my pets. I’m alone a lot of the day, and they are the majority of my company. They are also allowed to roam pretty freely through the house. But I never put in as much effort to be positive with them. It was just sort of conversational. “Hey…how’s it going? You want some food? Bath time!” etc.

But, from that point on, whenever Simon meandered into the room, I would not touch him or try to pick him up, but tell him how happy I was to see him by effusing, “Hi, Simon!!!” I would continue by saying how handsome he was, how much I loved him… you get the picture. Normal crazy talk from a cat lover.

Slowly, his mood began to change. I noticed when I said the word ‘love’ his eyes would half close, and his muscles would relax. In case it was a fluke, I repeated the sentiment using a few other words and inflections, but he only relaxed when I said ‘love.’ It sounds crazy, I know. But I’m only repeating the facts.

Eventually, he started to relax more permanently. He began sleeping with the other cats again, and he started sitting next to me and letting me pet him. The choking problem became less and less of a problem.

Starting in November, he actually began climbing into my lap again. Last week, while my friends and I (and dog Riley) watched a movie, he gingerly settled into the crook of my arm. He slept there for over an hour, purring, and never once choking.  It was a very happy moment.

So here’s the thing. While I was conducting this experiment with Simon, I started to wonder: If speaking positively worked so well with him, and my other pets (because by this time, I’d started using the same positive affirmations with them) how would it work on people?

I know. Of course people respond positively to affirmation. Everybody knows that. But does anybody actively try it? So I tried it. While I may not have been as stupidly enthusiastic as I was with my animals, I did try greeting friends with a renewed sense of love and happiness. I behaved as if they were the most important thing in my world at that very moment that I saw them. And while they didn’t begin purring, I did notice their expressions were happier, and more relaxed. The very atmosphere seemed lighter, and more pleasant.

While some things with Simon haven’t changed, (he still guards the tub for me), he has become so much happier, and my life, as a result, has become happier. 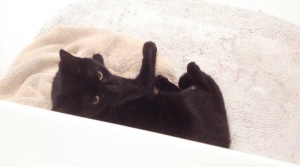 Guardian of the Porcelain Galaxy

And the same with my friends. They became happier, and in turn, they started extending that happiness to others. It was a kind of domino effect.

With the New Year looming only two days away, I think that might be a good resolution. The world is already filled with so much sadness. Try injecting some pleasantries. Greet others as if they are the most important thing at that very moment. Experiment. The results might surprise you. 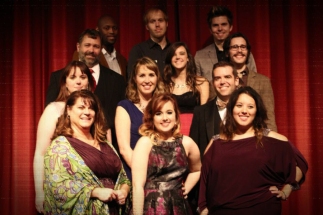