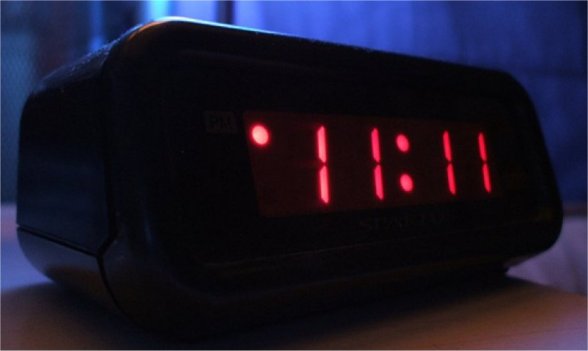 11:11 has been haunting me for about five years now.

I do not tell you this story because I expect you to believe it. It’s unbelievable. I wouldn’t believe it if it was told to me. But it happened to me, so I have to believe it. I also have friends and family who have been witness to it and the effects.

I will tell the story as succinctly as possible.

It began in 2011, shortly after the completion of “No Lost Cause.” I am, admittedly obsessed with clocks, but what began as a simple odd coincidence morphed into a freaky occurrence, and then finally to a reassuring signal.

You see, it was around this time (no pun intended) that when the urge to check the hour of the day came over me, and I would glance at my phone, or bedside alarm, or some other digital form of telling time, that the display would read 11:11. (both am and pm).

Obviously, I would look at the clock at other times of the day, but this time began to become more and more frequent. It started happening so frequently, in fact, that I began taking screen shots. At it’s zenith, I counted 45 screen shots in a single month. I was not cheating and waiting for that time to hit to take the screen shot, nor was I actively pursuing the oddity.

On the contrary, it was beginning to freak me out.  Especially when I began getting receipts where my check out time was stamped 11:11, or the total of my order was $11.11.

Why did I keep seeing this time? This amount? This number? What did it mean?

I did some internet research, and depending on your belief system 11/11 could either be a signal from Someone supremely evil, or supremely divine. Of the two, naturally I was hoping for the latter.

Finally, one day, about three years later, when my poor, frazzled brain thought this would be the new normal of my life, I looked at the clock, and it was 11:12. Then, the  next day, it was 11:14, and so on. Whatever it was, it seemed to be over.

But what had it been?

It was a few months later that I found out that our film, “No Lost Cause” had been acquired by TBN (Trinity Broadcasting Network) and would be broadcast on their station. The day the film was approved?

Was this a signal? Were the numbers tied to the film? It remained to be seen.

Because it began to happen again.

I saw the numbers, over and over, for several weeks, and then just as suddenly, I stopped seeing them. I did some research, and found out that “No Lost Cause” would be playing on the television station again.

This theory would be proven over and over during the coming two years. The numbers would occur, over and over, for days, sometimes, weeks or months….and then they would stop. And every time, it was connected to something positive for our film.

Meanwhile, our second film, “The Hepburn Girls” was completed quite a while ago. We have been working off and on since it’s completion seeking distribution.

I tell you all of this, not because I’m looking forward to the ridicule that will surely follow, but because it has happened again.

The past few months, I’ve been seeing my old digital friends.

On October 1st, I uploaded the film to Vimeo. A few days later, I was emailed by two filmmakers who noticed it and wanted to know if I was interested in entering their filmmaking contest, where the grand prize was a distribution contract.

After doing some research on the company (because, be smart) I liked their concept, the way they ran their website, and I thought I’d give it a shot. As I’ve been prone to say many a time before….”Why not?” (It is, after all, how I ended up with two films). Plus, I’m a sucker for a good contest.

I originally was under the impression I’d be entered into their “Winter Season” competition and that the film wouldn’t premiere until February or March, but when I was emailed my premiere date, I stared at the computer, dumbfounded.

The date of the premiere?

Beginning tonight at 7pm (CST), and for the next 20 days, our film will be available completely for free. If you like it, you have the opportunity to “become a fan” and donate $3 to this competition. We get $1, and the rest goes to help continue to make this contest available for other independent filmmakers. At the end of the competition, the film with the most “fans” wins.  Pretty straightforward!

I hope you have an opportunity to watch it. While a distribution deal would be a wonderful answer to prayer, even more important to me is the opportunity to give as many people as possible the chance to see my story.  I hope you find some value in it, and in the message, which is based loosely on events that have happened to me in my life. It was very cathartic to write, and even more cathartic to act out.

The film focuses on the life of Katherine, a woman who is her own worst enemy, who uses humor as a defense mechanism, and who pushes away all possible paths to happiness under the misguided notion of self-punishment for an accident she never speaks of. She has locked herself in a PTSD cage of her own making, and it takes her newly discovered half-sister Audrey to help her figure out the way to mental and emotional freedom.

It is also powerful testimony of Romans 8:28, “All things work together for good to those who are the called according to His purpose.”

Will this contest work together for my perceived good of a distribution contract? Or will it simply be good for someone to see my story, and know they are not alone?

I don’t know…truly, only time will tell. 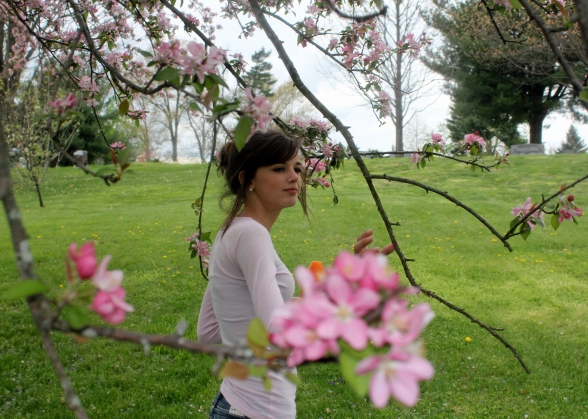 There is almost no real way I can put into words what I feel today, but I’ll give it a try. I can hardly believe it has actually been eight whole years since you appeared in our lives, a mere whisper of a girl. Your easy smile and sweet, (but incredibly sassy spirit) captured our hearts and we quickly adopted you as our own.

When we created a Christmas play and needed a child actor, you were the first person we thought of; not only did you have talent, we genuinely enjoyed having you in our company. Your infectious giggle, and eagerness to be with ‘the big kids’ was endearing, and your work ethic (at such a young age!) was remarkable.

When we decided to jump off this crazy peak of insanity called filmmaking, again, you were one of the first ones we called. You had more than proven yourself on stage, and we wanted you to be a part of this process, however far it would stretch us.

And stretch us it did! We learned, we cried (a lot) and we experienced so many things. You saved the film on the very first day by catching the camera before it was knocked over by a gust of errant wind. You would go on to save more than just the camera as the months, and years, progressed.

On the second film, you saved my personal sanity. You were there, every filming day, helping me load the car, talking me through my lines, picking out my costumes, helping me choose my hairstyles, and sitting up with me til 1am, reviewing footage and making notes for the next day, when, at 7am, we would do it all over again.

During shooting, I was perpetually on the cusp of a nervous breakdown, and you talked me down from more metaphorical ledges than you should ever, at your young age, have heard of. You held my hand, and told me it would all work out.

I remember looking in on you one night when you had finally collapsed in the guest bedroom, and you were sound asleep, holding your teddy bear (Sadie?). Seeing that nearly destroyed me with how precious you looked. I knew that this moment was fleeting, and that before I knew it, you would be a grown woman, too old for teddy bears, and crazy pseudo-adopted sisters.

And today, here we are.

Today you are everything I wanted you to be and never was at this age. Beautiful, accomplished, confident, brilliant, and with the world at your feet. You will never, ever be less than a champion in my eyes, and I can say with utter honesty, I could not imagine my life without you.

So forgive me if, sometime in the future, I look at you and get a little emotional.  You see, I will still see traces of that little girl, hugging her teddy bear, smiling up at me with that infectious grin, and giggling.

I love you, and wish you the happiest of birthdays. 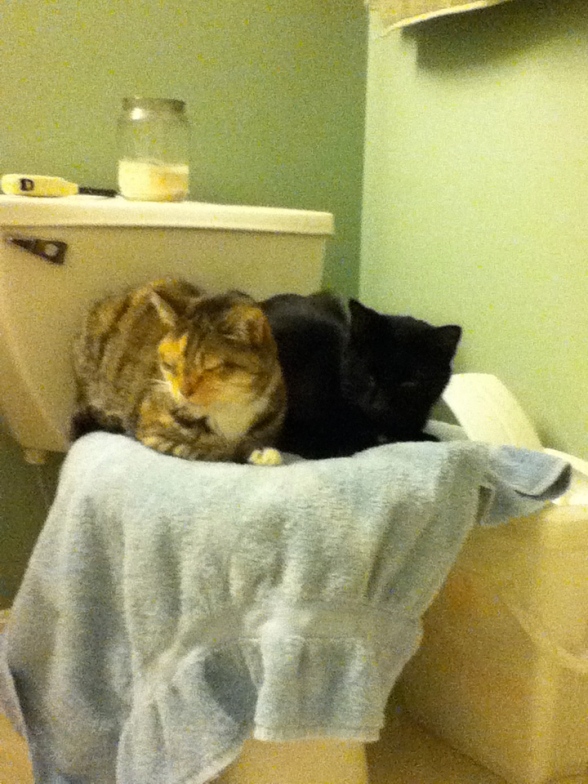 He will. He totally will.
There is absolutely nothing more humbling than cleaning a toilet.

No, wait.
There is absolutely nothing more humbling than cleaning a toilet that isn’t yours.

Hang on.
There is absolutely nothing more humbling than cleaning a toilet that isn’t yours in three separate locations. Six times. In one day.
END_OF_DOCUMENT_TOKEN_TO_BE_REPLACED 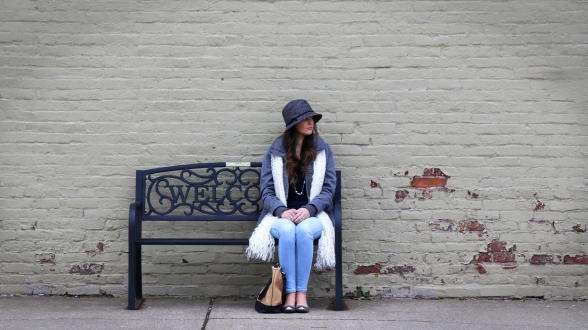 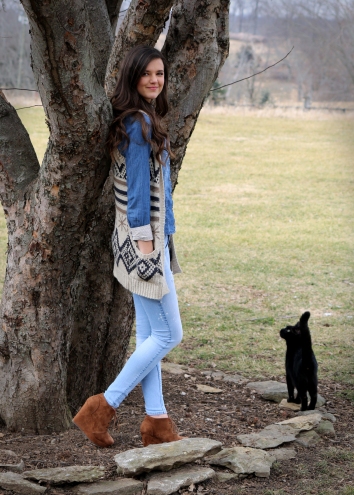 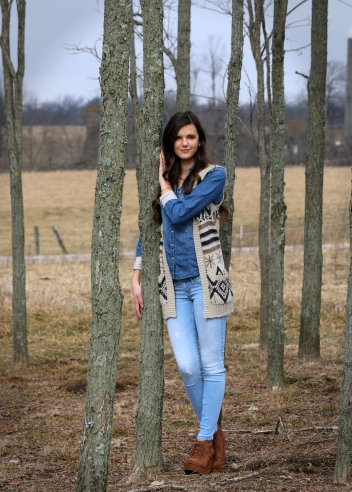 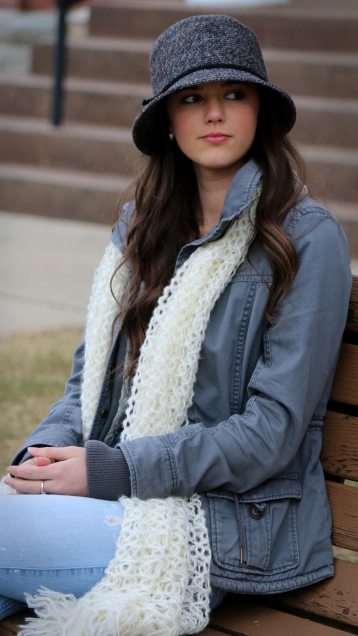 The face of determination 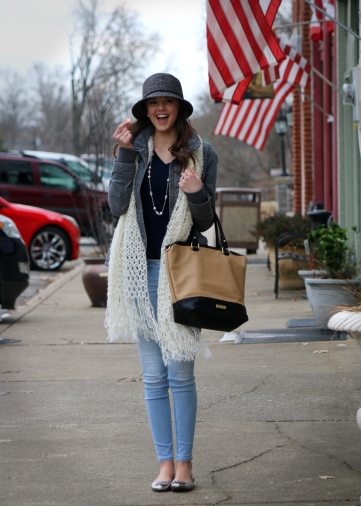 The essence of Hannah. She found a penny.

After a whirlwind weekend of a reunion party with a cast mates from a former show, and two days of auditions and casting for our new show, today was to be spent working on the manuscript again. Except that it wasn’t.
END_OF_DOCUMENT_TOKEN_TO_BE_REPLACED 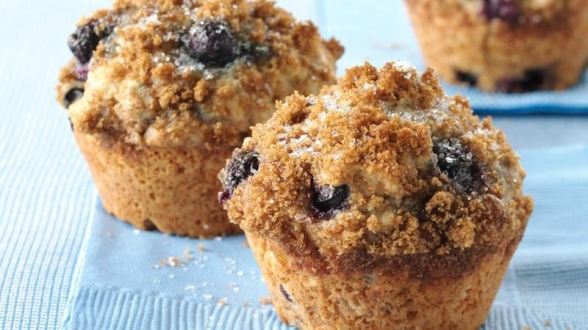 This week, I am sharing on of my favorite chapters from my work in progress, the novelization of my second film, “The Hepburn Girls.” This is still very much rough draft form, but I’d love to hear your feedback, and if it is something you would enjoy reading once the novel is complete.

For a synopsis of the film, please visit my tab labeled “The Hepburn Girls.”

Lunchtime finally rolls around and I tuck myself away in my favorite reading area. I never eat in the break room. It smells like burned popcorn tinged with the lingering aroma of stinky burritos. Instead, I like to eat the same way I work, surrounded by intelligent words. I am nose deep in a novel when I hear some rustling and the chair scrape beside me. I look up into the face of pure joy in human form.

Larry Louis is my classmate from high school. We used to ride the bus together before Alfred started driving. With Will Smith’s movie star good looks and a personality to match, Larry grew up to become our town’s mailman and favorite citizen.

A long time ago, I teased him about becoming mayor of the city since he seemed to already know everything about everyone anyway. He just smiled and shook his head.  I knew him well enough to read between the lines. While the suit of politics would fit him perfectly, his shoes of service were workman’s boots. To stuff him away in an office would kill his joy; he preferred to serve man and commune with God in nature.

I never brought it up again.
END_OF_DOCUMENT_TOKEN_TO_BE_REPLACED

Like Loading...
Follow Ashley Raymer-Brown on WordPress.com
The photo on the left popped up in my memories this evening as a "one month to 38" countdown.
As Marty McFly, Kelly Bundy, and Tony Stark, they ruled the world.
This week on ScandalWaterPodcast.com, we spend time with the legendary Robin Williams. 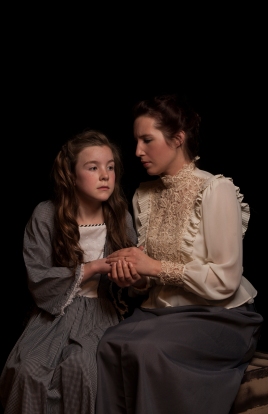 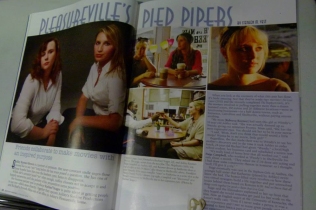