This was written shortly after I found Cat. It had been years since I had a feline as a pet. Happily living with two dogs, I didn’t know what I was missing until that day in December. Cat stayed with me for several months, and was the best mouser I ever had the privilege to know.

She took walks with me, slept with me, and just generally improved my life. After I moved, she ran away after some fireworks and a run in with another family member’s dog. She had started living in the wild, and she went back to the wild. One of her ears was grown together at the tip and was her only identifying mark. I searched for weeks, months, and then a year. I still miss her.

For those of you who don’t yet know the story, “Cat Ballou” is one of my very favorite movies. It is one that I watched over and over again as a kid, and actually never gets old. It’s a comedy western and stars Jane Fonda, Lee Marvin, Dwayne Hickman and Michael Callan. Lee Marvin won the best supporting Oscar that year as the drunken “Kid Shaleen.” He famously said that half of his Oscar belonged to “a horse somewhere in the valley.” Watch the movie. You’ll see what he means.

Anyway, on December 12th, I was coming home from running some errands when I saw a cat dart across the road. Since I live on a road that is a popular “drop off zone” (a place where cats and dogs are dumped by owners who know the schmucks on this street will more than likely take them in) I stopped the car. I got out and did the ‘test.’

I waited. If it’s a wild cat, they will not respond to this call and usually run further into the woods, granting me a huge wave of relief and the ability to go merrily on my way. However, in this case…..the cat darted toward me and practically jumped into my arms.

I started petting her and noticed that her stomach was bulging in what can only be described as, “the family way.”

She’d had kittens and everybody had been dumped and now it was freezing outside and I had to find the kittens too! I decided to call the vet. He told me to just take her in and not worry about the kittens if I couldn’t find them right away. While on the phone with the vet, a man pulled over and rolled down his window.

“I’m fine. I just found this cat and now I don’t know if she has kittens and I’m on the phone with the vet…..” and I gestured to the cat who was now curled up in my backseat purring as if she’d been born and raised in my car.

“Right.” He nodded in perfect understanding as he pulled away, leaving me feeling just a lil bit abandoned. Thanks, nameless stranger!

Anyway, the vet tells me to, “Take her in where it’s warm. She’ll get along with your two small dogs….the only thing she might give them is worms or fleas.”

Really? Could this get any better?

I decided to take her into the vet to get the worm pills. I needed them for the dogs anyway, and besides, she was curled up in the backseat, remember?

The drive to the vet was actually really uneventful. She howled (meowed with passion) a couple times, but we made it there. The vet took one look at her and said, “Oh….she hasn’t had kittens, she GOING to have kittens….in about a week or so.”

It just got better.

After shelling out $17 for pills–that she didn’t eat by the way…even after I first doused it with peanut butter (which she licked off) and then smashed into tiny bits and hid in tuna fish (she ate around it)–I took her to my grandparents house.

We all decided that she surely she MUST belong to someone on our road and came to the conclusion that she was one of the neighbor’s cats. So my Mom and I bundled her back in the car, and drove her ‘back home.’ They had several cats roaming their property and I kept trying to compare their features to my new best friend. I knocked on their door (I was greeted by three dogs, one of which looked just like a white version of the Taco Bell dog.) Nobody answered. I looked them up in the phone book…their number had been disconnected. I finally found a number and left a message. Nobody returned my call.

When I finally reached them, the husband informed me that “It might be our cat. There’s no way to really know. You can just keep her.”

“So there’s no little kid crying that his cat’s gone missing?”

“Well, would you let me know if you hear of one? I’ll be happy to return her.”

We both knew that wouldn’t happen. It seems I now was the proud owner of a cat.

Her name? What else?”Cat Ballou.”
I mean really, when else would I ever get that kind of a chance to name an animal that??

Next time: Cat Ballou meets the two dogs, Rosie and Riley. We also experience the wonder and joy of an indoor litter box. And as the days roll on, the question is first pondered: Was Cat faking pregnancy in order to find a home? 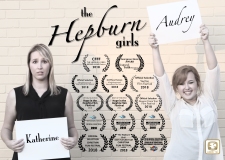